Here’s some information on the differences between Micro Inverters over DC Optimisers that we think you’ll find interesting.

There’s been a lot of talk about the Solar Edge system lately and from their marketing materials you’d think their technology was the answer to a solar installer’s prayers. But there are four things that you need to know before you install a Solar Edge system.
First: DS optimisers have all the down sides over old technology plus some new ones. String inverters have a single point of failure and Solar Edge systems have a second, single point of failure. If either the inverter or communications go down, power production stops. Micro-inverters have no single point of failure and if a micro-inverter or the communications go down the system keeps on producing.
Second: Solar Edge is proven to produce less power. A third-party testing facility found Solar Edge produces less power than the world’s leading micro-inverter day in and day out. Why because while a single DC Optimizer may turn on at 5 volts the whole system can’t turn on until it produces enough power to get the inverted going, and that takes 350 volts or more. That’s why a system with the leading micro-inverters wakes up a good 30 minutes earlier than a solar edge system each morning and keeps producing later each evening.
Third: DC optimizes are more complex to design and install. And you have to juggle your design around their limits. You need fourteen modules per branch to get the best energy production. You can lose 2% or more power if you have fewer or more modules and if you have fewer or more eight modules, it won’t turn on the inverter at all.
Finally the efficiency and warranty that Solar Edge talks about is misleading it’s the whole system that you have to think about so you have to multiply the efficiencies of the DC optimizer and the string inverter to get the true efficiency and the warranty, the warranty of the whole system is only as good as the shortest component’s warranty and the warranty for Solar Edge string inverters is much shorter than for their DC optimizers. As a solar installer you want a system that makes power for your customer and money for you. When it comes to flexible design, high power production and system reliability, micro inverters win out every time.

For more information on Enphase microinverters please contact us. 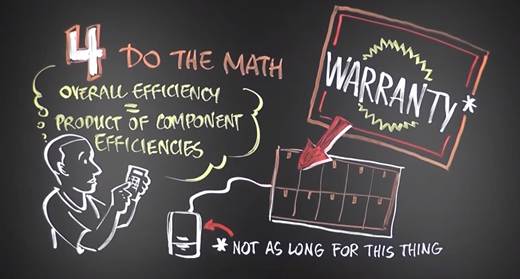