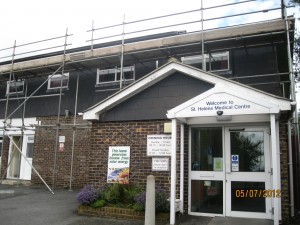 On the 6th July 2012 we completed the installation of  fifty one Schott 195 Perform Mono  modules onto the roof of the St. Helens Medical Centre near  Ryde on the Isle of Wight. This was a single phase string inverter system with two German SMA inverters which was predicted to provide over 9000 kW hours per year.The system actually produced 9294 hours generating a FITS income of over £4600 in its first year and the electrical import costs have been reduced by 38% saving them a further £1200 a year.