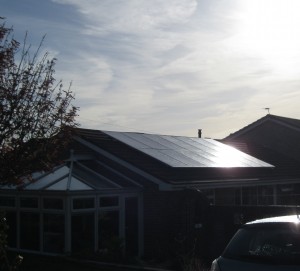 I thought you’d be interested to know what a splendid year the solar panels have had.  For the 52 weeks to 27th December they produced 3,243 units (very considerably better than  your original estimate of 2,606 p.a.)  Let’s hope we get an equally sunny year next year!

Incidentally the system has only once produced less than 3,000 units in the year, and that was in 2012 when we had a rotten summer.  That year the output hit an all-time low of 2,993 units, but still 10% better than the original estimate on which we made the decision  to install.